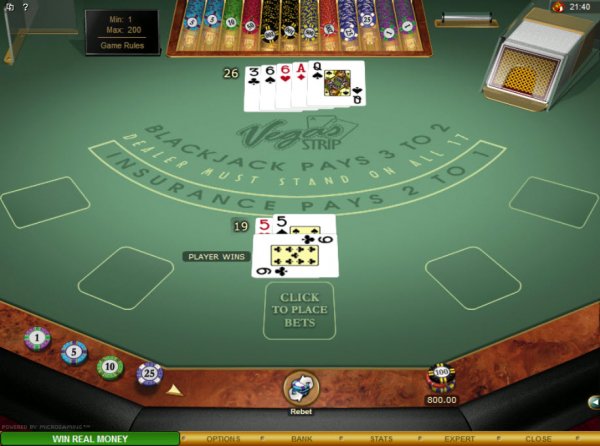 Microgaming has come up with an entire range of online video Blackjack games of which the Gold Series Vegas Strip Blackjack game is just one. The games are different to each other thanks to a number of variations that each has to offer, although some are more in keeping with the style of Blackjack that most people are familiar with. As is to be expected with any game produced and developed by Microgaming, this series offers amazing, detailed, and vibrant graphics, coupled with player options that allow players to customize the game according to their individual preferences. Microgaming has ensured that players will enjoy a realistic and rewarding experience that will ensure that this game will remain a popular choice.

The Gold Series Vegas Strip Blackjack casino game is a version that most players will be familiar with since the game follows the basic Blackjack processes. However, the customization options available to players are what make this game so unique. All the customization options that players can set up ensure that this is a very rewarding alternative to Blackjack played in a real-life casino. The rules are rather liberal which means that players are not restricted by a lot of rules as they would normally be. The speed of the game can be adjusted at will as well, allowing players the advantage of making the game progress at a faster pace. Of course, the graphics are something to behold and ensure that the game is very attractive, fun to play, and realistic as well. Unfortunately, these advantages do come at a cost. For one thing, players might run into some difficulty when it comes to either reducing their wagers or removing them entirely. Also, players can only wager on a single hand at a time

The Gold Series Vegas Strip BlackJack video game is played using four standard card decks of 52 cards each. The cards are shuffled at the conclusion of each round, which is known as the Random Shuffle. It goes without saying that the object of the game is the same as it is when playing Blackjack at a real casino in that the player tries to beat the Dealer by achieving a grand total of 21 or less but which is more than what the Dealer has. As with regular Blackjack, the player can choose to stick under the 21 total in the hopes that the Dealer will bust.

In the Gold Series Vegas Strip Blackjack video casino game, the player has the opportunity to take insurance when the Dealer shows an Ace card or a ten-value one. Insurance amounts to half the original wager that the player made and the winning payout is 2-to-1. As with regular Blackjack, the player can opt to split his hand provided that the two cards are of the same numerical value. Furthermore, the player can split up to three times so that he ends up with four hands to play. There is an exception to this rule, however, and that is when the player splits Aces. Also, if the hit is a ten, the hand will not be considered as a Blackjack. Players might also choose to Double Down once they have made a split. This is especially appreciated in this version of the game since it provides the player with an advantage that is not always available in other variations of the game.

Players can choose any combination of the sounds that are available from the game’s sounds menu as well as make use of the Strategy Cards. The Strategy Cards are very useful when the player chooses to implement the auto-play feature that is a common part of many of the games produced by Microgaming. A handy Help section is also available for players to use when they get stuck, or when they wish to learn more about this particular version of the game.